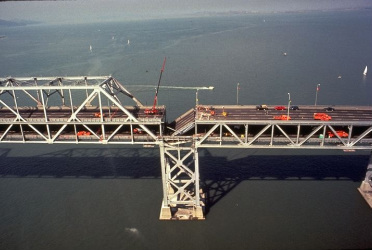 The Loma Prieta Earthquake struck at 5:04 PM, October 17, 1989. The epicenter was located in the Santa Cruz mountains, near Loma Prieta peak, about 70 miles south of San Francisco. Measured at 6.9 on the Richter Scale, the worst damage was in the nearby cities of Watsonville and Santa Cruz. There was also considerable damage throughout the San Francisco Bay Area, especially in San Francisco and Oakland. 66 people died, over 3757 injuries, $10 billion in damage. This earthquake really demonstrated the importance of the underlying soils in determining damage from an earthquake. Damage in San Francisco, for instance, was much worse in the Marina district, which is built on soft soils, than on the bedrock of the hills. Thousands of buildings throughout the Bay Area were damaged but the kind of devastation seen in the Marina was confined to relatively small areas. Because the quake occurred in an area that has been heavily studied by seismologists and was being monitored at the time, it produced a wealth of data that has aided our understanding of earthquakes. Study of this quake revealed that motion on the San Andreas fault can be more complex than previously thought. Instead of the expected horizontal slipping, in which the Pacific Plate moves north relative to the North American Plate, there was also vertical movement with the pacific Plate slipping under the North American Plate.

These earthquake hazard maps show the expected severity of ground shaking in the San Francisco Bay Area based on the underlying soils and distance from major faults.